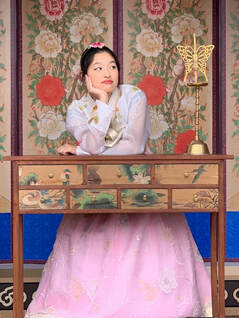 That's me. Living out my K-drama dreams.
My name is Ashley New - a seventeen-year-old Singaporean girl who's very proud of her Asian heritage. My greatest love is theatre, and I dream of moving to New York City to pursue a full-time career on the stage. When I close my eyes, I see myself taking a bow as Christine Daae in The Phantom Of The Opera, or Clara Johnson in The Light In The Piazza. But meanwhile, as I work towards making that dream a reality, I'm also a babysitter to an extremely spoiled Pomeranian who has her at his beck and call. I love feeling organised and in-control, and have a tendency to nitpick on finer details (that, in the grand scheme of things, usually don't matter). I'm also an extremely opinionated individual, and I love voicing my stance on issues that I care deeply about. But I also love writing, and writing about the most random things that make me stop, breathe and marvel at the wonder that is life, in all its complex simplicity.

Besides belting out showtunes from my shower, I also enjoy perusing modern literature as well as designing my future bedroom, which has had a total of four mental reincarnations by now. People often assume that my Spotify playlist only contains Broadway cast albums (mostly true), but what they don't expect is that I'm an also an avid fan of EXO, whom I've been a proud fan of since 2016. Greatest achievement to date - finding the ideal matcha powder to sugar to milk ratio for the perfect cup of matcha latte.